In the days of the Commodore 64’s popularity in Ex-Yugoslavia, software piracy was “legal”, at least – not sanctioned. Every town had it’s software pirate, and you could get all new games on compilation tapes. Those compilation tapes were all recorded using Turbo 250, a fastloader which would speed up loading from tape about 5 times. 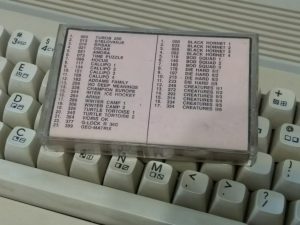 Now, the inconvenient thing here is that you had to load Turbo 250 every time you wanted to load a game. That would mean rewinding the tape to the beginning of Side A, loading Turbo 250, then winding it back to the place where the game is located on tape. Or maybe having a tape with only Turbo 250 on it. And not to mention the inconvenience of getting the head azimuth right, because if you were buying games from different pirates, it might happen that their tape recorders were not created equal (or they messed with the head azimuth before).

Some “small entrepreneurs” saw their opportunity in this, and started to create cartridges which would contain these necessary programs, and they could be loaded in a fraction of a second, as soon as you turn on your Commodore 64. By consulting the great archive of Ex-YU computer magazines found at pc.sux.org I found out that the first mention of Turbo 250 on a cartridge (or “EPROM Module” as they were called) was probably in October of 1985 (see lower left corner of the page). 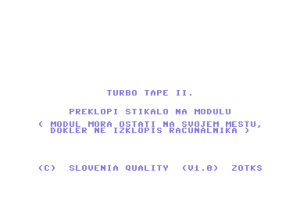 The first cartridges were quite simple – One EPROM, usually 8 kB (27C64) and a switch to enable or disable the EPROM. Not even a reset key. These would usually print out the message to flip the switch and press any key, and then Turbo Tape would be active. The message on the screenshot says “Flip the switch on the module. It must stay at it’s place until you switch off the computer”

This turned out to be quite a successful business. In January of 1986 a tape from your friendly neighborhood pirate with at least 15 newest and latest games would cost you around 1.000 Dinars (8 German Marks), and one cartridge was (in regard of how many programs were on it) from 4.000 to 12.000 Dinars (30 to 95 German Marks)! A blank 27C128 EPROM would cost locally around 3.000 Dinars (22 German Marks), but in a well-equipped store in München they would probably cost less, and they were easy enough to smuggle in so you wouldn’t have to pay 60+% of import duties.

All this data was found in the January 1986 issue of Moj Mikro magazine. Take in account, that a average salary in Yugoslavia by the end of 1985 was 40.000 Dinars and the inflation already started to kick in.

I won’t be going into full detail of how to create a simple Commodore 64 cartridge – World of Jani has a great write-up with all details, code and schematics. Instead, in the next part of this series, we will analyze the hardware and software of some utility cartridges that were popular and have been sold in Ex-Yugoslavia. Stay tuned…